I wrote a article about  using MIDI by ‘Software Serial’. In this article, I also mentioned to how to ‘avoiding switches chatter’. This is new version of the method in old article. But for someone who never interested in MIDI, I write this method in this article again.

This is the video using ‘gauging method’.

You can see each switch reacts individually.

When using a switch on Arduino, it is sometimes impossible to distinguish exact ON / OFF with physical contacts by bouncing, which is called chattering. Although there are many workaround methods on the web, some methods to avoid in terms of electric circuits require separate parts, and otherside, general programming avoidance methods sacrifice accuracy. So, I invented the easiest way to ignore just chattering just by programming.

In the previous article, there was only one switch, and during pressing it was a difficult way to put other instructions. However, this time I will show you how to handle even multiple switches. 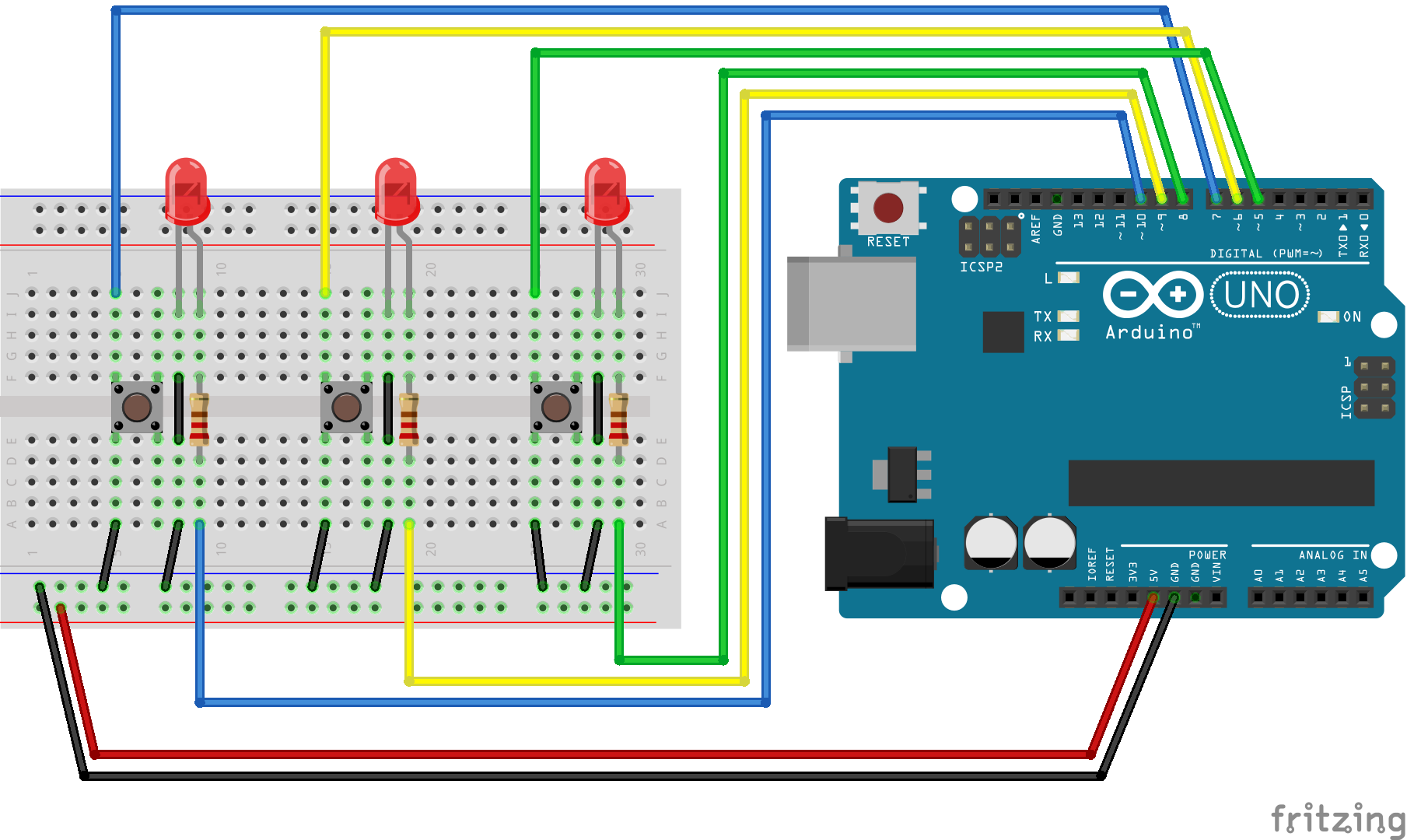 1. ON / OFF LED for each individual switch

Define the number of pins handled first by ‘SW_NUM’ and arrange the switch and LED digital pin numbers in the array according to the number. By the way, if you change here, you can increase the number of switches that can control.

about Define of pins

The main switch determination function “BUTTON” is processed by ‘if’ instead of ‘while’ statement. This make it possible to use multiple switch.

Preparing ‘gauge’ variable as each switch counter, increase counter if digitalRead is HIGH, reset if it is LOW. Also I defined ‘PUSH_LIMIT’ by ‘min’ function so that gauge counter does not increase too much.

Each switches conditions is shown on ‘sw_status’ variable.

If the gauge counter has reached the ‘PUSH_SHORT’ value, it judges to “pushed” and substitute 1.

If the switch released and the gauge has accumulated to some extent before resetting, it judges “pushed and released” and assign 255.

If there is nothing, it remains 0. It will pass those results as return values. That is, this “BUTTON” function indicates the state of the switches as,

In the end, all you need is to make each behaves by its returned values.

Action by return of BUTTON function

At this point, it’s only actions when you release the switch. So, next step, I will introduce a sketch that the command changes by switch pushing duration.

It is the same that the LED turns on and off for each switch pushing. But it blinks when pressed for a while. Of course, each switch operated individually.

Basically just add constants according to your wishes.

Defines the length of switch by ‘#define’.

Then, You can add pushing time patterns as you like by adding up in ‘BUTTON’ function. The difference of pushing time will be returned as 0-255 value by ‘sw_status’.

about Button function by counter length

It is completed by sorting the behavior by the return value from “BUTTON” function. Here we finally assign assignments to variables sent to the “LEDS” function.

In this method, the amount of increasing counter changes depending on the interval time during which “BUTTON” is executed in the loop. In other words, you have to adjust the value of the ‘#define’ for your sketch length.

In the sample sketch below, the counter value of the pressed length is returns to the serial monitor.

Please find proper value that makes it “long press”, “middle push”, “push” with your own project. I recommend that you final adjust again when your project is completed. I recommend you to comment out or delete this ‘Serial communication’ functions after adjustment. Because it affects the processing speed in loop.

If you use ‘delay’ function, it will cause the counter value to decrease greatly. So if you can’t avoid from ‘delay’ function on your sketch, it may be better to use ‘watchdog timer’.