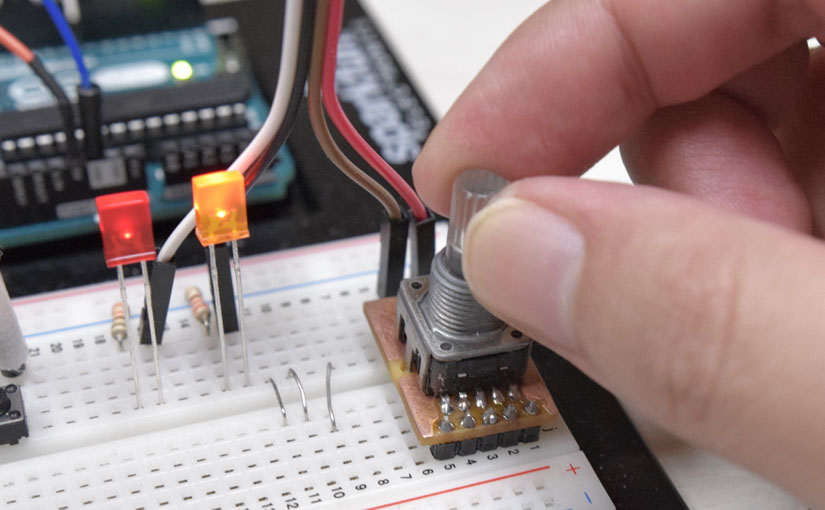 If you want to control the value step by step with Arduino, it is a quick way to ‘analogRead’ using a variable resistor. 、But, there are another way to use rotary encoder. However, if you try to implement it, there are practically difficult aspects. It is a so-called chattering problem.

I would like to write a method that can be avoiding problems encountered in using rotary encoders on this article.

The explanation in this article is a method that I thought during make my own ‘follow focus’.

What is a rotary encoder?

There are two types of rotary encoder, but in this article I will only deal with incremental type.

The rotary encoder is a knob that rotates just like a variable resistor. But, the structure is completely different. Its structure is a continuous switch, so it turns on and off depending on the turning angle. You can see whether this knob moved or not, by this mechanism.

However, with this, it can not tell its direction. Therefore, there are two contact points in rotary encoder, and which is slightly misaligned.

Considering the two contact states collectively, it can tell the direction by patterns. This is how a rotary encoder works. 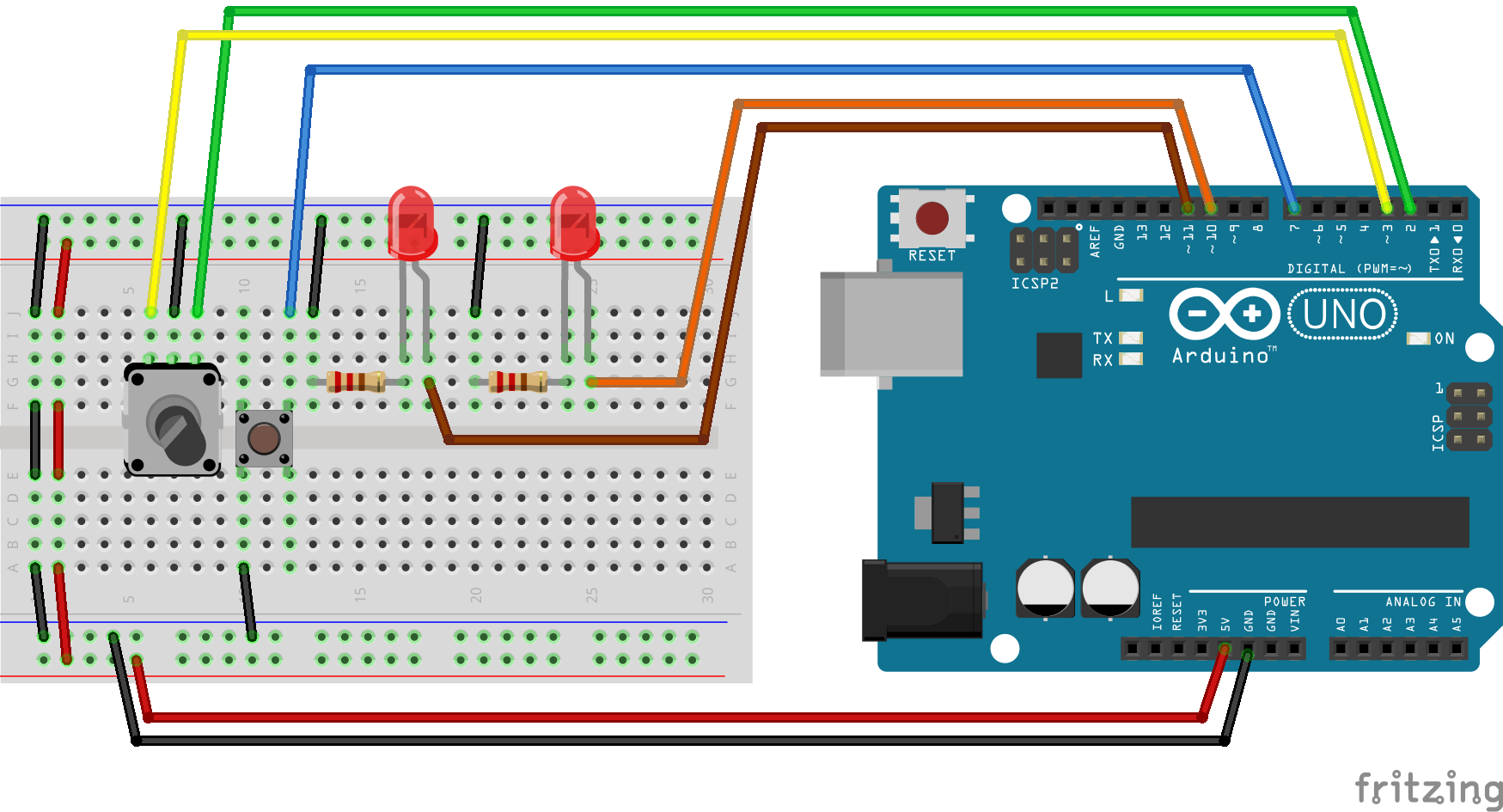 Rotary encoders have two types of click and unclick. Click type have a clicking feel when it’s rotated. In this article, I will use it.

As mentioned above, it is usual to specify “attachinterrupt” in the ‘setup’ function. Although Pins that can be used for ‘attachinterrupt’ depend on the type of Arduino, but in this case, Arduino UNO has D2 and D3 pins.

Be careful that it’s not pin numbers in Arduino but it’s number for pins which is correspond to external interrupts. For ArduinoUNO, the D2 pin is 0 and the D3 pin is 1.

Function to be executed

This is the function name to be executed when a change is detected. In this article it is set to “ENC_READ”. But like general function rule, it is OK with arbitrary name unless you use reserved function name.

Conditions to be executed

Specify what kind of state the designated pin will respond. There are several conditions, and specify it with the following character strings.

First, I will write a sketch that can always check the encoder’s status. The result is displayed on ‘serial monitor’.

If it detect a pin change, repeat simply reading both pin states (cur [0], cur [1]) and returning the result in ‘Serial monitor’. 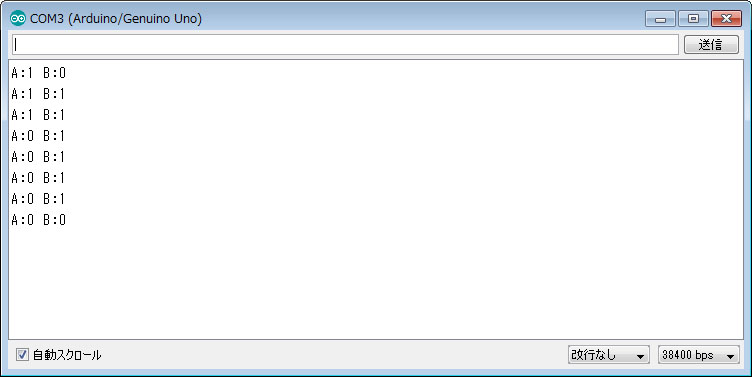 It supposed to be displayed only four times per a click, but it is displayed extra due to chattering. This problem will be resolved later, so let it be for now.

Assuming that the basic place is ‘W’, the pattern of both pins will change continuously  to the next ‘W’ during one click. Check the summary down below.

Next, rewrite the sketch so that two pin states can be handled as a set. In this case, it will be simple by combine two bit into one byte with ‘bit shift’.

And adding ‘A’ pin status to this, you can see both status in one value ‘cur’. 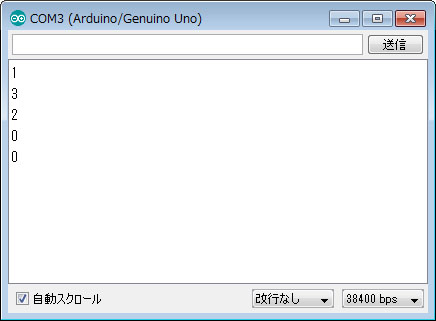 The relationship between binary numbers and decimal numbers can be summarized as follows.

Now, the encoder pattern can now be expressed with 2 bits. However, as array of decimal numbers are 0 – 1 – 3 – 2, it confusing. So I will rewrite it so that it is aligned in order for convenience.

3. To detect the direction

The next step is detect the direction identification. To know the direction, you need to match with the previous pattern.

Declaration of variables for pattern information

On interrupt value, you must put “volatile” on declaring.

Since 2 patterns can be stored with 2 bits, we will combine this time and last time into ‘pos’.

I have changed the pattern to normal number. So I can easily see it rotates forward if it increased except “0 to 3” or “0 to 3”. Now, apply it.

judge the direction of rotation by current and previous value

In this way, we can get direction, get into “rote”. And “Serial monitor” displays result. By the way, a highest bit is set to HIGH (128) to prevent the number of digits of the binary display from changing on “Serial monitor”.

For convenience of display, being enabled the most significant bit. 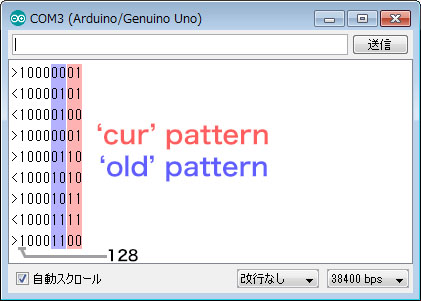 Here, we add chattering countermeasures by refer the previous pattern. You can see there may be duplication between the previous time and this time on serial monitor. I change sketch so that if it is not together, it will be updated the pattern memory.

Although the response was improved, it is still not possible to prevent erroneous operation by chattering perfectly. 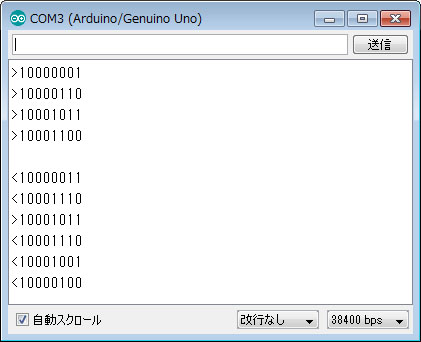 Based on what we have done so far, I try to count with encoder rotation. But, chattering problem is still remains. In order to avoid this, we need to change our way of thinking.

At the time, this problem was terribly annoying me, but one conclusion came out. As the one click becomes one movement with four patterns, you do not have to follow all patterns on rotary encoder. Important things are “start moving” and “end of moving”. If it is captured properly, it will be work as a count.

So I make ‘dir’ variable to tell it whether or not you move. Then write the pattern of the starting point when you start moving, and reset to 0 when the movement is over.

There is nothing to do with patterns and chattering in the middle, if it can catches proper starting and ending.

Finally, put the ‘dir’ bit into the ‘pos’ variable.

Summarizing, it will be the sketch below. For counting, “enc_count” is newly prepared. 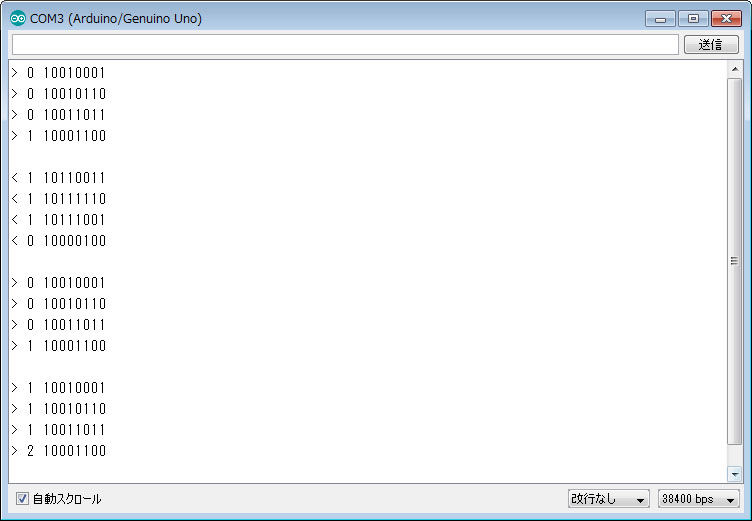 How about that? I think that it works quite accurately. If you have a complaint about response, comment out “Serial.print” in attachinterrupt. This cause to delay of precise counting.

Interrupt processing always executes immediately when there is a change. So if you try to use “enc_count” value in the main loop, it makes discrepancy. Therefore, we separate function of counting from total count value.

By making “ENC_COUNT” function, we can get bridged value.

In the end, draw a sketch that you can individually adjust the brightness of the two LEDs with a rotary encoder. You can toggle the LED by the switch. Also you can see the values of LED on the “Serial Monitor”.

In addition, you can also add LED pins by increasing the pin numbers on “LED_SIZE” and “led_pin”.