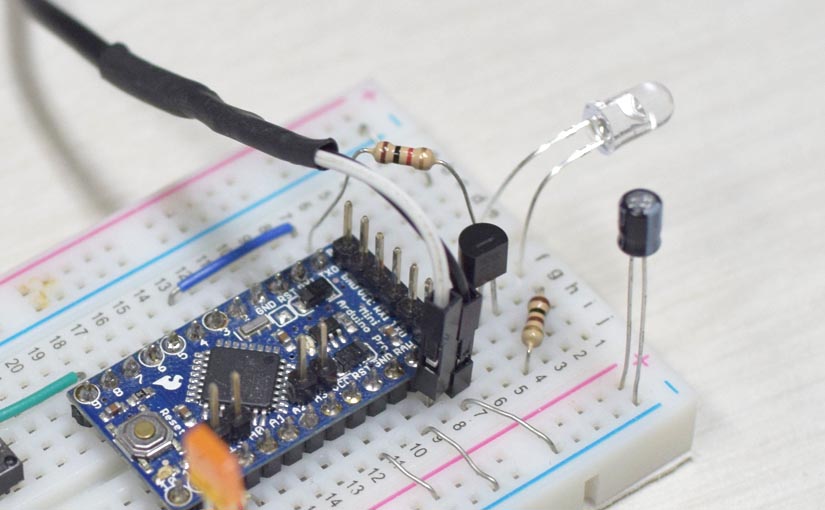 In general DSLR, there are remote release function of IR on their camera. I tried to use the IR function with Arduino. It’s a DIY Remote control.

This article mentions about only Nikon DSLR, cos I don’t have other maker DSLR.

Calculate resistor value by yourself, since it depends on the Arduino you use and the infrared LED.

The capacitor is used as stabilizer of electric, I think. So its value is not strict.

It is good to operate a current amount separately by using a transistor in order to earn infrared flying distance. Of course, it works without it anyway.

As reference, I used this transistor.

This transistor is such pin specification.

If you have, normal LED is available on D13 pin for confirm working.

Anyway, I have confirmed this sample works.

Notes in IR use

Basically, there are no different to use IR LED as well as normal LED. But some notes you should know in use IR.

Human can not watch Infrared ray. So, it makes difficult to check its work.

Infrared can be seen with video cameras and some DSLR cameras preview. So check with it, if you have.

Infrared LEDs that can be easily obtained are often narrow directivity. The more truth, it seems that infrared LEDs are not such as to be irradiated in all directions.

This means a little misalignment of direction causes transmission fail. You may think it’s not truth, but in fact, some IR remote has multiple IR LED.

I didn’t know that and it made me confused. “why it doesn’t work!”.

You have to keep IR LED close to receiver as possible during experiment until you get to works well.

In my experience, working distance of IR is for 1 meter half. If you want to get more distance, much more scheme is needed for electric parts and wiring.

On Nikon DSLR, you have to set to “receive IR” from menu.

By the way, this setting seems to return to default when you turn off the power. Be careful.

There are two IR receiving device on Nikon DSLR. You should aim IR LED to here.

For example, in general, digital signals are separated by a fixed time, and bits are detected by the difference in on / off of voltage that occurred during that time.

You can say this is replaced by the blinking IR LED as it is.

However, there are no common format in IR transmission. Only one thing I can say is that every format has a “leader” signal and “data” signal.

So, Nikon’s infrared remote has the time scale rule as follows.

It seems that this blinking needs to be repeated twice with an interval of 63.2 milliseconds.

At first, I thought that I can send this command just by “digitalWrite” and “delay”. This is the experiment sketch.

But, it never works. Because there is a rule to use general IR as transmitter.

Since infrared light exists in the nature, the light emitted by the infrared LED is buried within the noise. So, receiver cannot receive the command signal as it is.

Therefore, efficient way is give the IR LED rest at regular intervals instead of letting the infrared LEDs shine all the time. Saving the energy (electricity) accordingly and release it at once.

By doing this, it is possible to release infrared light which can be clearly distinguished from noise.

And if it being checked on the same cycle by the receiver, it will be able to restore and recognize it as an equivalent signal as a result.

This is what I understood a method called “carrier” and “subcarrier” by infrared communication. “Carrier” is the transmission / reception blinking cycle, “Sub-carrier” is the data you want to actually send.

According to SB-Projects, Nikon IR remote release format seems to send with a carrier wave of 38kHz,

In my thought, if the subcarriers can be transmitted with repeating on / off every 26 microseconds, it will function as a command signal.

So, by putting the changeover scale in the array, I can repeat the blinking of the carrier at constant intervals in the loop.

However, on Arduino, some functions waste a few microseconds in one command. It is necessary to insert delay in anticipation of this for carriers.

In terms of the above reasons, the longer the longer break time could be make electric charge, I think. So I changed the balance of delay time from the reference site, although I will never know that changes make efficient.

That’s the all of the first sample sketch meanings.

Despite I wrote so far, you can get this type of remote control in quite reasonable price at Amazon. On the contrary, genuine article of nikon remote is not so expensive. You should get it if you don’t want to gamble it with cheap unstable ones.

However, if it is to know the mechanism of infrared communication, this is a great teaching material…. I think.

Well, at this conclusion, it makes me regrets. So I made a sketch this Remote with timer function. One thing, this need to be keep on aiming receiver. Cos it is just a delay function of release transmission.

The circuit diagram is the same as above. However, a 13-pin LED is required for operation.

When you press the switch, it immediately turns off the shutter.