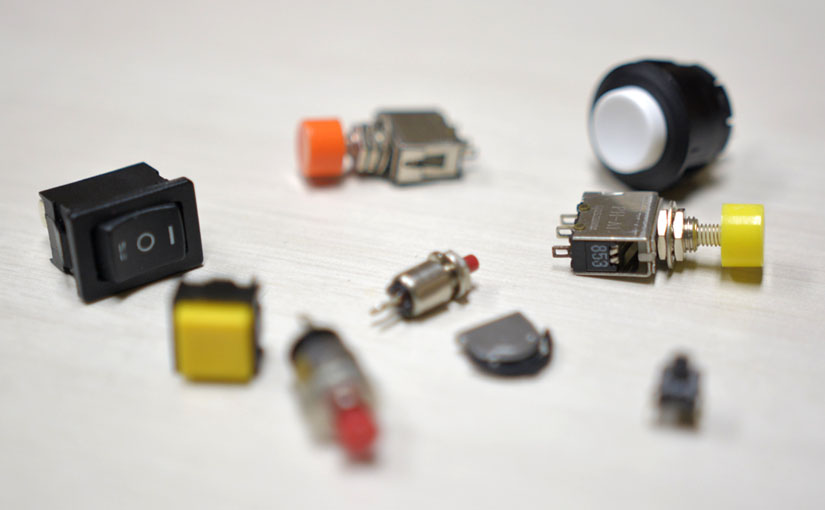 Lighting LED is your first task with the Arduino. Then you use a switch for the next step, don’t you?

This is a simple example for using a switch. Taking digital signal from pin 4, judging, apply the result to 6 pin which is set LED.

Pin 4 is used ‘internal pullup’ so that you don’t have to use any other electronic parts. Instead, logic of 4 pin is inverted. So ‘digitalRead’ on 7 line is also inverted by a sign ‘!’. Then this value allows you to apply result directly.

In this sketch, LED light turns off when you stop pushing swtich. So I prepare global variable ‘button’ for LED state and keep it turn on.

Also I have to prepare ‘button_now’ and ‘button_old’. Beause Arduino is so fast that “on or off judgement” is repeated at your one push. On first repeat, there is no push in ‘button_old’. But ‘button_old’ is updated to ‘pushed’. So, reversing ‘button’ task can not work on second repeat.

Could it be worked ? Yes there are wrong reactions sometimes.

This is what you call ‘chattering’.

A switch is very simple mechanism. It’s have two contact for electro and are energized by push.

But it is bouncing after pushing or release at very short moment. This is like a phenomenon that let it fall a ball on the ground. It occurs under 100 millisecond. But Arduino resonse is so fast that tell the difference between bouncing.

In short, ‘chattering’ is a physical problem.

There are no ‘chattering’ on your electronic products. Because they have took a countermeasure in advance for their product. You can see many methods for avoiding from ‘chattering’ on Web.

These are basic way to avoid from ‘chattering’. Also there are several ways to avoid by programming.

There are so many different ways for avoiding from ‘chattering’ by detail. Please check them out at yourself.

To avoid from ‘chattering’ by a programming

Before my theory, I show you a typical example to avoid from ‘chattering’ by using ‘delay’.

Arduino waits for a while after ‘digitalRead’. So, Arduino never encounters to the ‘chattering’. Some people uses interrupt timer, because it stops all task.

But those methods can judge only in certain duration pushing. They cannot tell fastest finger move. I wanted to that. But I dislike to calculate on electronic circuit.

I had a trial and error. Then I got a idea.

I was inspired by a avoidance of condenser circuit. The circuit is using storage effect of condenser.

“It may work, if I reproduce the same thing on programming ?”

This is a sketch of the idea.

If there is a digital signal in pin 4, Arduino keep counting. If pin 4 has released, then it judge the gauge value. If gauge value reaches ‘PUSH_SHORT’, it becomes ‘push’.

I think this works very well in spite of simplicity. This sketch means “I count anyway, but I never admit it has pushed unless over the ‘push_short”. So, Arduino ignores ‘chattering’ which is small count. 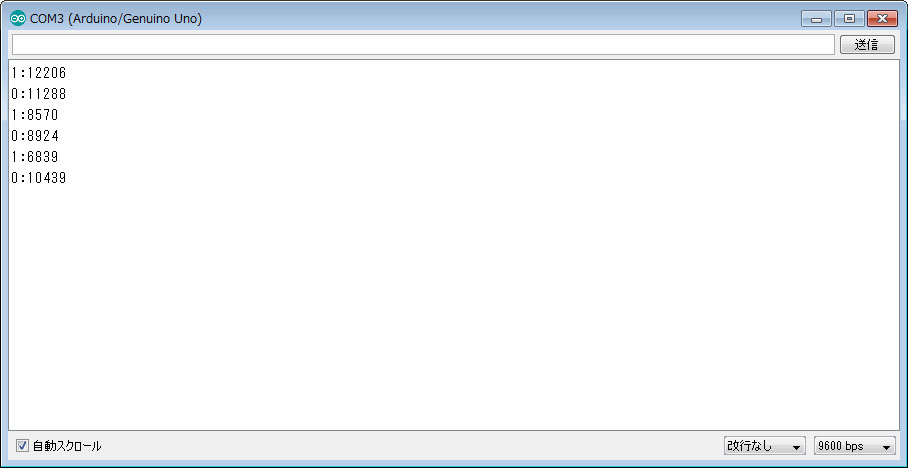 These are certified count values on Serial monitor by Arduino. I pushed a switch so fast, but these values are too large for Arduino. This values prove how human moves slow, to computers.

By the way, you might have been noticed already to another merit.

You can tell long ‘push’ by this methods.

By define value of ‘LONG_PUSH’, it can take different action. I think it’s gonna be a hard sketch to tell a long ‘push’ in ordinary ways. But in this methods, just set a ‘PUSH_LONG’ value.

It’s very simple and practical. But there are few cautions.

Well, I introduced my unique way for a switch. And I have already used this methods on my DIY follow focus project ‘AR-FOCUS’. Off course, it has worked well, so far. Please check this out.

There is new article about this ‘gauging method’.

Finally, I introduce to you a small game sketch using this methods.

In japan, there was a famous game ‘sh-watch’ once upon a time. This game counts how many times you pushed switches in ten seconds. I thought this gauging methods can reproduce the game easily. So I did. All you need is a switch and LED.

Push switch. Then it counts three and start game. This game compete how many times you can push the button in 10 seconds. You can see result and dialogs on Serial monitor of your Arduino IDE.

If response of your switch is not good. to comment out 44 line. Because “Serial.print” has a delay.