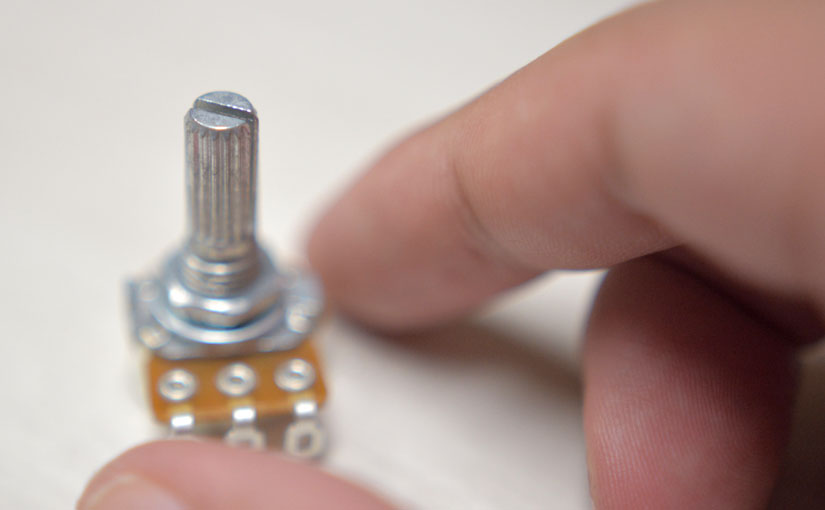 It is so very easy to read analog value of variable resistor in Arduino.

After wiring as of the above to Arduino, you write a sketch.

Now you can see the value by Serial monitor in Arduino IDE.

Arduino reads comparisons what divided from 5 voltage into by variable resistor. If you remap the value in what you want to control, you can do anything, like motor speed control.

But there is a problem. This value has fluctuations. I think it is caused by ‘analog’ as itself.

‘5 voltage’ does not mean exactly 5 volt. There are small changes always. For example, even if you flow exact 500ml water through the pipe, you can not always keep the surface of the water height. There are deviation always in real world, I think.

It goes on if I never mind. But I do. I refuse to use controller of convulsions.

Honestly, this is a first step problem of ‘analogRead’. And you can find so many ways to solve it on web. I have categorize them into 3 ways.

I have already a conclusion, but it is not these methods. But at first, let me explain these way.

1.Taking break after each ‘analogRead’

Then, fluctuations will be gone, if there is a interval for each read. So, let put ‘delay’ in.

You can see ‘delay’ at line 12. Now, Arduino reads A0 pin at each 1 seconds. But ‘delay’ stops all task, so this causes bad response.

I use ‘millis’ to make practical interval simply.

I can get interval time by subtracting previous reading time ‘time_read’ from present time ‘millis’. If that time has been over 1000 millisecond, Arduino starts to read. Then, ‘time_read’ is updated after the read.  This is a temporary timer work, I usually use.

As a result, this is not effective way.

Arduino UNO has ten bit resolution, that means it has 1024 range for analog reading. Strictly, its range is from 0 to 1023. So, divide the resolution to dull response.

I divide value by 10 so that it is abandoned. The resolution is decreased to one-tenth of. Instead, it will be stable.

Perhaps, this is useful in several situations. But analogWrite needs to be range from 0 to 255. I will try to fit in a range by dividing at 4, then.

There are fluctuations in value still.

It is same way of taking average in your classroom test. Reading several times, then divide by the repeated count.

I will use ‘for’ so that code to be short.

Yet, still there is tiny fluctuations. But perhaps, this is the most stable methods in three solutions.

These are basic ways of avoid from fluctuation on ‘analogRead’.  Sometimes they combines the methods for more stability.

But each methods has a weak point like ‘low resolution’, or ‘not perfect’.

To be selfish, I had been searching for reasonable way quite a time. Then finally, I got a methods on Web.

Updating little at a time

My friend who is expert of science says “this is low pass filtering”. But I can’t figure out how it works. I’m not a man of math.

Anyway, this is simple.

Arduino just get a value by adding 10% of new value and 90% of previous value. In the C language, it is possible to do a calculation of the decimal point by putting a decimal point.

Almost there is no fluctuations. I can’t believe that I got such stabilization in a such simple way.

But there is some down of resolution. This caused by decimal calculation, maybe. Still, the range is over 1000.

Although this methods is very useful, there is caution. Each updating is done in a little. So its response goes slow if there is ‘delay’ on a basic loop. You can’t benefit from this methods unless total sketch flows smoothly.

In the end, I wrote a sketch combining ‘little methods’ and ‘average methods’.